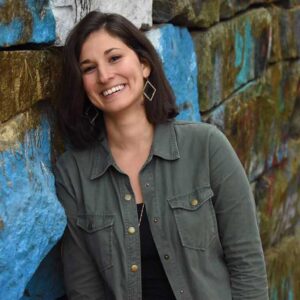 Ariel Strasser has been delighted to provide music at Congregation Shalom since 2017! Her love of Jewish music began at a young age, growing up in a musical household and learning new songs and melodies around each Jewish Holiday. In addition to her work as a cantorial soloist, Ari is a singer, songwriter and multi-instrumentalist based in Boston, Massachusetts. She brings her native Minnesotan charm to all her live performances – telling stories and sharing laughs with her audiences across the country. 2019 brought two New England Music Award nominations including one for “Songwriter of the Year” and one for “Album of the year” for her newest release “Motivation”.

Ari is a graduate of the Boston Conservatory at Berklee’s Musical Theater program (BFA). During her time at the Conservatory, she helped pilot the Songwriting Emphasis within the Theater Department, helping to develop the curriculum that still exists today. She has performed in festivals around Greater New England including The Boston Arts Festival, The Town & the City Festival and more. She has toured with and opened for national artists such as Chris Trapper, Lucy Wainwright Roche, Antigone Rising, and Brooke Annibale. When she isn’t touring the country delivering her soulful pop tunes, she serves on the faculty within the theater/songwriting department at the Boston Conservatory at Berklee. She also serves as the Vice President for Artistic Programs at ArtsBridge helping to train the next generation of artists. She lives with her guitarist husband, Ken Budka, and two fluffy cats, Bertie and Huey. www.arielstrasser.com