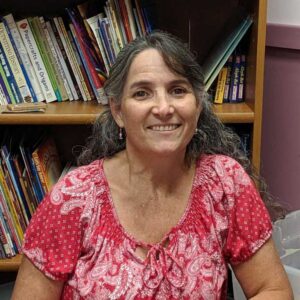 Born in New York, Deborah was raised in southern California and has lived in Massachusetts for more than half her life. She earned a bachelor’s degree in psychology from UC Berkeley and a master’s degree from Tufts University in Child Study and Education. Deborah is very passionate about education and has been immersed in the field for her adult life.  Deborah has worked with children of all ages from babies through high schoolers. She taught for many years at Tufts Educational Day Care Center and in the Cambridge Public School system. Deborah has been a teacher in the Religious School Program at Congregation Shalom since 2007, teaching many different grades.

She lives with her husband John and often shares her home with dogs that need a vacation from their owners. Her three children are all in college. Deborah likes to read, walk, hike, bike, quill, garden, can, and bake. She can be reached at eddirector@congregationshalom.org.