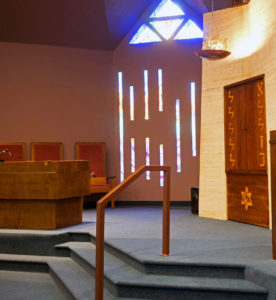 Our sanctuary features many unique and cherished art objects and furnishings.

Stained Glass
The stained glass windows were created by Emanuel Genovese, an artist who works in glass. On the eastern wall, there are two separate but integrated themes. The seven slender panels join to form the traditional menorah, representing the seven days of creation. The triangular windows above the menorah represent a Magen David.

On the southern wall, there are 2 larger windows bracketing 6 slender ones. The larger ones depict, respectively, Jacob’s dream and Moses at the Burning Bush. The slender ones depict the three pilgrimage festivals and Jewish celebrative moments.
Rabbi Terry Bard was instrumental in commissioning the work.

Torah Ark
The Torah Ark, donated from a synagogue in Long Island, NY, was transported in pieces by members. The cracks in the marble were repaired by Phyllis and Terry Howard.

Ner Tamid
The Ner Tamid (Eternal Light) consists of the Hebrew letters shin, lamed, vav, and mem, in the form of flames, and reading from right to left, spell shalom. It was designed by Zelman Kamien and made by a professional metal worker.

Decoration over the Ark
Mounted above the Ark, the stained glass, depicting the Lions of Judah supporting a crowned Ten Commandments, was designed and created by Harry Rubenstein.

Ark Doors and Magen David
The initial letters of the Ten Commandments on the ark doors and the Magen David below, spelling Shalom, were designed by  Zelman Kamien and built by Harry Rubenstein.

Holocaust Torah and Display Case
In 1968, Congregation Shalom was granted the “permanent loan” of Czech Holocaust Scroll #1184. Donald Pearlman, first president of the Temple, was instrumental in obtaining the scroll from the Westminster Synagogue in London.

The tag mounted in the case with the  Torah is inscribed in German, “Altestenrat der Juden in Prag. Zentralmuseum” (Council of the Elders of the Jews in Prague, Central Museum). The tag was attached to the Torah when it arrived in England from Prague.

The display case for this Torah was designed and built by Dan Dubner.

Ceramic Kiddush Cup and Candlesticks
The ceramic Kiddush cup and candlestsicks used during Shabbat services were designed and handcrafted by Phyllis Howard.

Ceramic Mezuzah
The ceramic Mezuzah, located inside the left set of sancturay doors as you enter from the lobby, was handcrafted by Phyllis Howard.

Other Unique and Cherished Items at Congregation Shalom

Shalom Tree of Life
The Tree of Life commemorating births, bar and bat mitzvoth, anniversaries, and ‘In Memoriams’, was initiated and maintained by Zelman Kamien for many years.

Tzedakah Box
The Tzedakah Box for charitable contributions was built by Dan Dubner.